Today, after 10 days since starting my Shiny Pokémon Week, I have hatched a shiny Shroomish via the Masuda Method. It took 1,016 eggs for this to happen and as you can see from my previous posts, I was getting frustrated but it worked out in the end. With regards to the hint in my previous post, Shroomish and Skitty are both in the Fairy egg group. 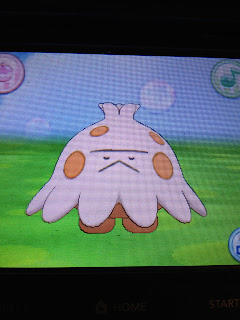 I named my Shiny Shroomish  あきし (Akishi), which can be translated as "Autumn warrior". It is a suitable name for a male shiny Shroomish because it has autumnal colours and is a mushroom, which can be associated with autumn. He has a Sassy nature and his ability is Poison Heal, which is a good ability to have in order to confuse opponents with a poisoned Pokémon healing itself.
Also, he has a perfect HP IV thanks to his Korean Shroomish mother (his father is my own (Japanese) Chikorita who has a Serious nature, which is in accordance with the rules I have set on the first day of the Shiny Pokémon Week). After the long stretched out time that passed in order to get a shiny, I have taken a break from Pokémon breeding at the moment.﻿﻿
Posted by Kalle Sweet at 22:55 No comments: