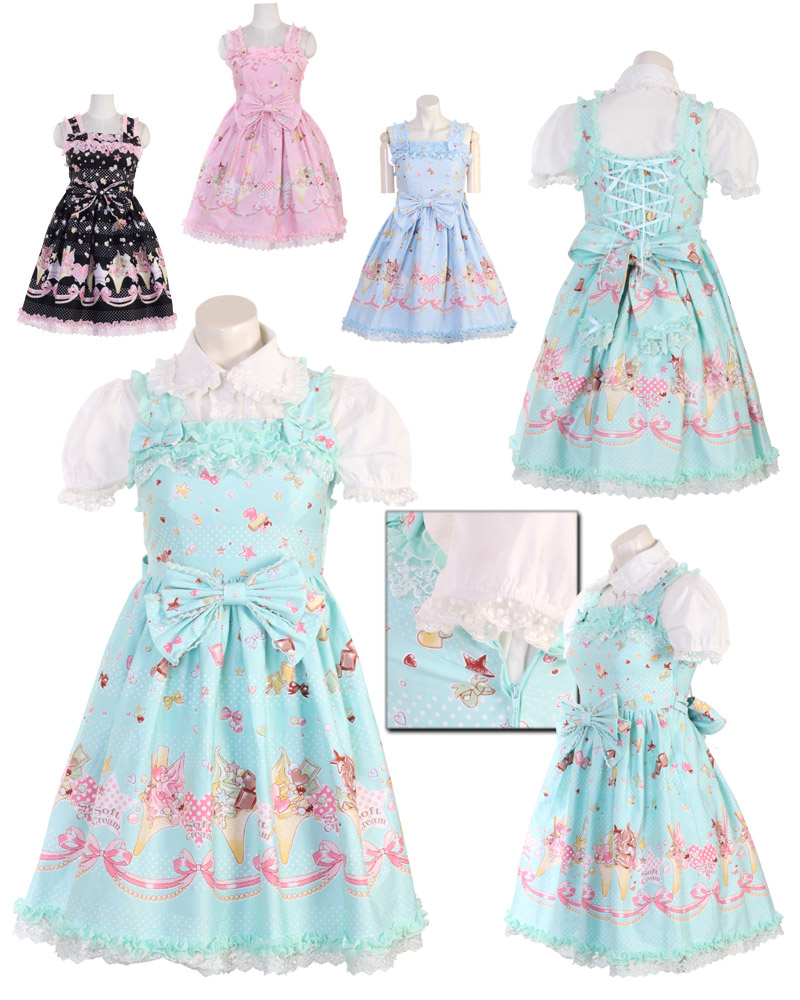 The first print is Bodyline's Soft Cream. The print reminds me of ice cream and the ribbon border just draws attention to the ice cream cones, which are filled with soft serve ice cream of multiple colours and each cone seems to have multiple toppings. The rest of the jumperskirt is also filled with various motifs. This, in my opinion, is one of Bodyline's best original prints.

The next print is AP's whimsical vanilla chan. The cats (which are my favourite animal) on the skirt are cute and have various expressions. The ribbons vertically arranged on the skirt and bordering the kitties draw attention to the cats and the alternating colour ribbons on the cats' necks are a very attractive detail on the print. When I first saw it, I wished I could buy it but I guess I have to wait until I can find it second hand or get a replica of it.

When I first saw the Dreaming of Macarons OP in a GLB, I wished I could get it and also wanted to look at the Angelic Pretty online store and fell in love with the brand. The cakes at the bottom as well as the various macarons and strawberries across the OP just made me fall in love with the print even though I had never tasted a macaron in my life nor knew the full name of the print at first (I could originally read the name of the print as something "seeing macarons" from my ability to read katakana and a handful of kanji at the time). Seeing it again at an online second hand shop and how it would fit me made me disappointed at the time as I was not able to afford it at the time but someday...
Posted by Kalle Sweet at 00:38 No comments:

For my first opinion post on a brand print, I have chosen to do Meta's Fancy Egg.

First, the pinafore jumperskirt in mini length does seem to have a nice cupcake shape and might be well suited to a sweet-classic wardrobe or a sweet wardrobe.  The bows on the straps add a nice touch as well as the waist ribbon. Compared to other jumperskirts, this one is relatively simple. Personally, I would have considered adding lace to the hem instead of chiffon but that is just my taste.

The skirt is also cupcake shaped, which would also make it well suited to a sweet-classic or a sweet wardrobe. Even though there is chiffon attached to the hem, there is less on the skirt, which makes it look better. On the waist, there is a removable bow that has a pearl chain attached to it. As with the jumperskirt, this skirt is also quite simple.

Between the jumperskirt and the skirt, I would choose the skirt because of the bow and the lower amount of chiffon used. Between the four colours (black, pink, sax and green), I would have a hard time choosing between pink and sax because they both add brightness to the print and bring out the best in the colour palette used for the print.
Posted by Kalle Sweet at 23:36 No comments:

From a personal perspective, having Aspergers is both a disability and a personality difference.

The disability is my difficulty in understanding social situations as well as a "normal" person. This is similar to culture shock in some ways such as interpreting body language and emotions as well as understanding social rules. For me, body language is a language that is similar to a second language. This may be hard to understand for someone who can easily pick up on non verbal signals but imagine that these non verbal "words" were in a language that you cannot understand. As with a second language, I have learn to interpret non verbal language but I am not exactly fluent in it.

Speaking of second languages, learning Japanese has given me a deeper understanding of social rules by studying another culture and practising dialogue that is similar to a social situation.

One thing that can be both a disability and a personality difference are my semi enhanced senses. There are some things that I can not tolerate sometimes to the point of feeling sick (e.g. the smell of oranges). On the other hand, there are somethings that I find calming such as touching satin.

In terms of personality differences, I find it easier to understand something if it is presented visually rather than verbally. This is common with many Aspies (another way of saying "people with Aspergers"). Because of this, I find reading something easier than listening to the same thing. Perhaps this is why I taught myself to read before starting school.

My visual preference could be one reason why I was drawn to Lolita fashion in the first place. Another reason for this that could relate to my Aspergers is the detail that is present in Lolita clothing.

Speaking of detail, I can be quite detail oriented and sometimes a perfectionist. For example, I can have a very good assignment when marked but I can see it as average.

To end this post, I will quote Simon Baron-Cohen,  a renowned Autism researcher in a brief summary of Autism (this can be applied to Aspergers as well).

Let me start off with the "average" Australian. She is 164cm tall, is of English descent, possibly comes from a family with married or divorced parents.

That is not me.
I am only 155-156cm tall, half-Finnish and I come from a single parent family and my mother has never been married. Other things that separate me from the "normal" Australian include I have Asperger's syndrome (which is a form of Autism) and I have an interest in Lolita fashion. For more information on Lolita fashion (Not the novel), then please look at Hello Lace. On the Lolita side of things, I prefer Sweet, which I am trying to get into.

﻿
Above: One of my favourite Angelic Pretty prints, Milky Planet.﻿