Today, AP just released its Promenade de Paris series, which is the first city inspired print I have seen in Lolita.

First, the OP has a boatneck/sailor neck line with a bib on the top. Instead of the waist bow, it has a waist ribbon, which creates a belt like effect. Also, the pleats at the bottom is something different from the lace that is normally seen. The use of a pink background with purple detailing is cute. The only problem with the OP is that it has no shirring whatsoever, which restricts the sizing. Overall, it is a nice OP.

Next is the halter neck JSK, which has a larger bib than the OP but does not have the waist ribbon. But it has a bow on the upper part of the bib and half back shirring. It also has a removable waist tie at the back, making it flexible in terms of sizing. The sax colourway does not have the same effect as the pink x purple one. However, the pink ribbon borders on the print do stand out more, which creates a strong effect.

The skirt of this series is another non-traditional miniskirt that you cannot fit a petticoat in. Sure, Lolita does not always require one but the shape of this miniskirt seems to be very inflexible because the hips need to be within a certain width or the skirt will not fit in contrast to the traditional bell-shaped skirt, which is a free size in the hip area. With this particular skirt, the pleats break up such a beautiful print, which is a shame but the ribbon detailing on the upper area is a nice touch.
Overall, the Paris inspired print does give the impression of walking though a Parisian street with cafes, patisseries and other kinds of shops. The print also includes two features of Paris: The Eiffel tower and a woman (in this case a girl dressed in Lolita) walking her poodle. I would consider buying the OP or the halter neck jumper skirt in either pink/purple or sax if I could.﻿
﻿
Posted by Kalle Sweet at 00:41 No comments:

I love the glitter Mary Janes that Misako Aoki sometimes wears. However, there seems to be no mention of where she got them from.
Also, I have not seen any of the main Sweet Lolita brands sell any type of glitter shoe even though I think they do suit Sweet Lolita well. In Australia, there are sparkly shoes (I.e. glitter, sequins, rhinestones) for sale at various shops. I have a pair of glitter shoes though. 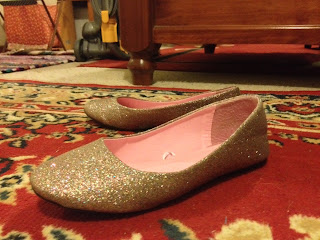 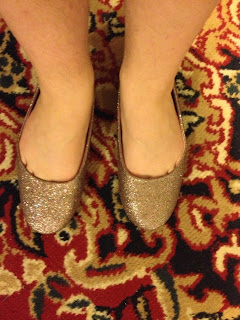 Unfortunately, the above photos seem to mute the effect of the glitter but the rainbow glitter can be seen. In regards to Lolita, these shoes could be worn in Sweet Lolita and due to the colours present in the shoe, could work well with any co-ordinate as long as it has colour in the OP/JSK/skirt in my opinion.
It's a shame that the brands have not created glitter shoes even though they have glitter prints and accessories with glitter. Maybe that could be a future trend for Lolita (not that Lolita relies on trends a lot). ﻿