Why Lolita brands should not have a shop in Australia

Even though many Australian Lolitas dream of a brand shop opening in Australia, I don't think it should happen right now for three reasons.

Increased prices
In general, things in Australia are more expensive for reasons that are collectively called the "Australia Tax" (one example is the high rate of rent shops pay here). This would increase the price of new brand items (which can already be expensive). While shipping costs would be reduced if items were shipped in bulk to the store and the items are delivered to the customer domestically, this would be negated by the increased price of the item compared to an identical one from Japan or even America.

There is no ideal location
The better places for a Lolita brand shop to open would be Sydney, Melbourne or Adelaide due to the increased population and size of the local Lolita communities as well as Brisbane or the Gold Coast in the Japanese companies' eyes. I said that they were better places but not ideal because the costs of rent in Sydney or Melbourne would be too expensive, Adelaide may also have higher rent prices and it may not have the appeal of the other cities to an Australian tourist. While Brisbane and the Gold Coast are popular tourist cities, they can be difficult to get to due to distance from the other cities mentioned as well as other places in Australia. Because of these reasons, there is no ideal location for a Lolita brand shop unless an even better location can be found.

Not enough customers
Even if New Zealand Lolitas are counted in the number of potential customers, there will probably not be enough people that would buy from the shop to make it financially viable. The potentially higher prices may further reduce the number of customers. This is due to the low population of Australia. While Innocent World opened a shop in Austria, which has a lower population than Australia, the customer base was higher due to its neighbouring countries and the short land distance between said countries. This is different for Australia and New Zealand as they are separated by sea and have a larger distance, which requires air travel to go between the two countries.

Because of the mentioned reasons, it is not a good idea for a Lolita shop to open in Australia unless the brands can think of a business model to use in Australia that would solve all of the problems mentioned in this post. For an Australian Lolita, this means that the only way to get brand in Australia is through second hand sales and to buy new brand, ordering it from Japan.
Posted by Kalle Sweet at 00:20 No comments:

In this post, I am going to give my opinion on two coords featuring AP's Cream Cookie Collection as well as include my coord of the same print with my opinion on it. 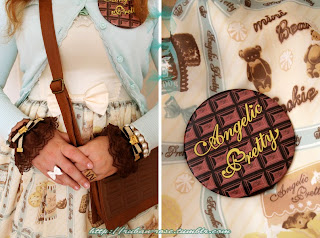 First is a coord from Ruban Rose. The use of chocolate accessories is a nice idea as it goes well with the chocolate based biscuits that are included in the print. The mint cardigan and hairbow are also nice touches because they emphasise the ribbon that creates a grid pattern on the print. Overall, this is a nice outfit that is simple and works well with the JSK by making it elegant and going towards the more classic side of the JSK. 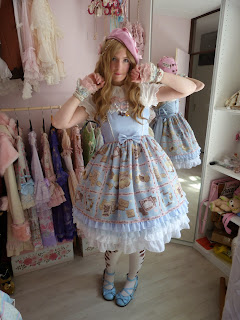 The next coord is one by SneezingBubble. It is OTT on the arms but works well by using the colours from the JSK. The beret does add a bit of classy-cute to the coord and the patterned tights do work well with the print. One thing that does make the JSK look nice without making it look like an undergarment peeking out is the multi tiered underskirt, which goes nicely with the frill hem on the JSK. This would be something that taller Lolitas could consider when wearing a too short item. Not that I need it (one advantage of being short) though. Overall, this is a lovely more ornate coord that is not too OTT. 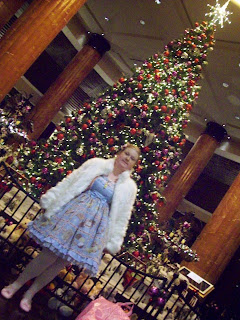 This is the only coord I have of Cream Cookie Collection (so far). It is a simple outfit but effective. While you can not see much of it, the flower bolero I used did suit the JSK ribbon grid design, the next coord I make would either include a blouse or an outer better suited to the theme of the print. Also, I would consider adding bracelets/rings to the coord as well. However, I think this was a decent attempt at creating a coord without full access to my wardrobe (I was on holiday). If anyone has any other suggestions, feel free to comment.
Posted by Kalle Sweet at 00:36 2 comments: